Today I met my new granddaughter, Scarlett. She is now 8 days old and as cute as can be! 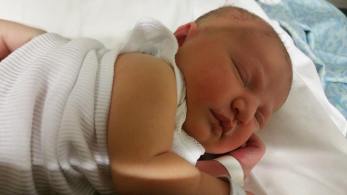 Scarlett was born on 10th March 2016 at 4.54pm, weighing 8lb 50z and measuring 51cm long. Given her father, my son Ben, was 9lb 14oz and 55cm long, her mostly uneventful entrance into the world was a huge relief! Also, it seems she has escaped the blood disorder my son was born with (hereditary spherocytosis). The genetic blood test done yesterday will not yield results for another couple of weeks. However, I feel confident, given the lack of jaundice in her skin and eyes, her overall good health and ability to suckle ample nourishment, demanding this where her father did not, that she is as healthy as she appears to be.

In the blink of an eye, this gorgeous baby will be grown. Think of the memories she’ll create with her family, the friends & experiences she’ll have. I can only wish that her passage through life will be as smooth as possible, and that any difficulties are handled with grace and eloquence.
From the time Ben and his partner Leah announced their baby’s imminent arrival, I have been excited for them. Knowing they’re embarking on the greatest adventure of their lives – an adventure I’ve enjoyed with all my heart, albeit as a single mother – is all and so much more than I’ve hoped for my boy. And what a natural daddy he is.

So much pride in Ben’s face as he holds his daughter Scarlett for the first time!
Why wouldn’t Ben & Leah (or anyone at all) be proud of this little cherub?
To see the layette I created for Scarlett (having made some boy items too, but far more in pink), go to https://www.pinterest.com/carot4/scarlettes-layette-items/ . It was both a joy and an honour to create the many beautiful items crocheted and sewn over the past few months for her.
Throughout this process, I decided to continue making baby items, and women’s too, in order to improve my financial prospects. I also see this creativity as an opportunity to regain sanity and a sense of purpose, both derailed by ill health and, very recently, my daughter’s betrayal of the bond I’d believed we shared – a love so deep that we’d eventually rebuild the trust destroyed by her lies, drug abuse, poor choices with various different (violent and drug-addicted) men, and lack of proper maternal prioritisation that her two children deserve.
Creating items of beauty for my third grandchild went a long way to restoring me to the person I was before my daughter (her current boyfriend, not the father of either of the children, and his brother in tow) came to my home on the 29th November 2015, bashed me, forcibly removed her children from my care and chose to place them in ‘care’ rather than have them live with me until their future is decided via the welfare system. I wasted all of this past summer grieving the loss of my daughter, grieving the loss of my grandbabies now that they are within a system that chooses not to allow them the love, safety, security and happiness of my arms and home because my husband, in 1996, was convicted of assault due to drunken stupidity. I was given the option of moving with the children into accommodation provided by the child protection unit, asked to leave my husband of 4½ years or lose my grandchildren within their system. They told me they have no qualms about the children being placed with me, that when they removed the children from their mother’s supposed care my 2 year old grandson was wearing a plastic shopping bag for a nappy. They also told me that Brittany stated she did not want the children placed with me. When it was explained that the only other option was the children being made wards of the state, their mother chose for them to become just that.
But enough of that sad tale in this post; I will not let ‘her’ erode the pleasure I feel at my son’s beautiful daughter entering our lives. And, somehow, I will enjoy Scarlett without feeling guilty as I did today, feeling that I’m betraying my darling Lauren in seeking to begin a relationship with Scarlett. Guilt-free enjoyment might be a while into the future, but I will make it happen, even if right now tears gather and the familiar grief physically hurts, my chest tight, so much pain that I can’t imagine happier days or guilt-free enjoyment of this new, precious angel who entered my world on the 10th March 2016.
Welcome, darling Scarlett, to the world and our lives. Love Always, Gramma xxxx